What Is a Permanent Pacemaker? 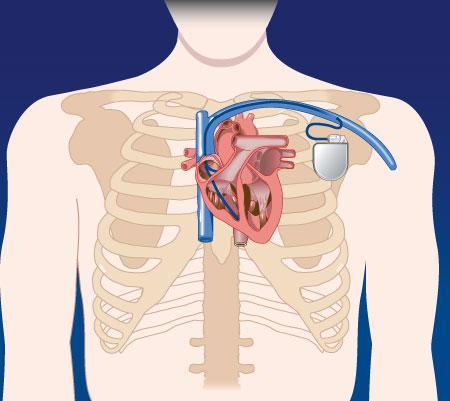 A pacemaker is a small device that's placed in the chest or abdomen to help control abnormal heart rhythms. This device uses electrical pulses to prompt the heart to beat at a normal rate.

Pacemakers are used to treat arrhythmias (ah-RITH-me-ahs). Arrhythmias are problems with the rate or rhythm of the heartbeat. During an arrhythmia, the heart can beat too fast, too slow, or with an irregular rhythm.

During an arrhythmia, the heart may not be able to pump enough blood to the body. This can cause symptoms such as fatigue (tiredness), shortness of breath, or fainting. Severe arrhythmias can damage the body's vital organs and may even cause loss of consciousness or death.

A pacemaker can relieve some arrhythmia symptoms, such as fatigue and fainting. A pacemaker also can help a person who has abnormal heart rhythms resume a more active lifestyle.

Your heart has its own internal electrical system that controls the rate and rhythm of your heartbeat. With each heartbeat, an electrical signal spreads from the top of your heart to the bottom. As the signal travels, it causes the heart to contract and pump blood.

Each electrical signal normally begins in a group of cells called the sinus node or sinoatrial (SA) node. As the signal spreads from the top of the heart to the bottom, it coordinates the timing of heart cell activity.

For more information about the heart's electrical system and detailed animations, go to the Health Topics How the Heart Works article.

Pacemakers also can monitor and record your heart's electrical activity and heart rhythm. Newer pacemakers can monitor your blood temperature, breathing rate, and other factors. They also can adjust your heart rate to changes in your activity.

Pacemakers can be temporary or permanent. Temporary pacemakers are used to treat short-term heart problems, such as a slow heartbeat that's caused by a heart attack, heart surgery, or an overdose of medicine.

Doctors also treat arrhythmias with another device called an implantable cardioverter defibrillator (ICD). An ICD is similar to a pacemaker. However, besides using low-energy electrical pulses, an ICD also can use high-energy pulses to treat life-threatening arrhythmias..